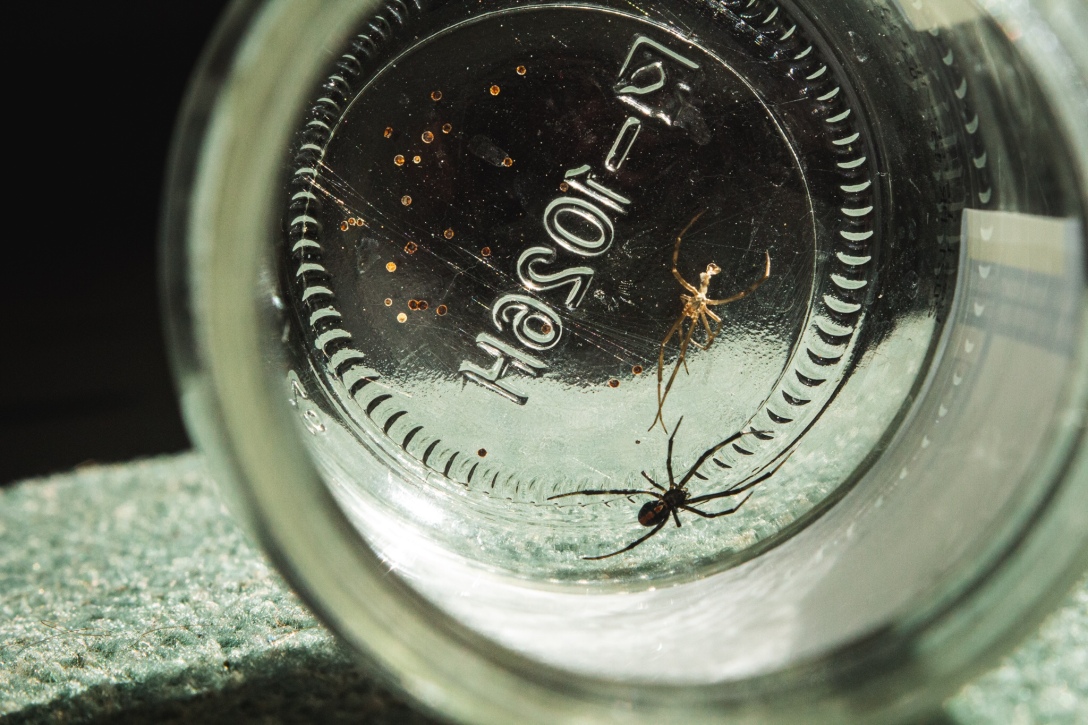 There are four spiders in my bathroom right now. Yes, four.

Do I want there to be spiders in my bathroom? No.
Am I brave enough to move them? No.
Can I bring myself to kill them? Also, no.

Instead I’ve accepted the fact that the spiders will stay there, and I have to live with the fear that one of the little buggers might try to crawl into my knickers while I’m on the toilet.

The reason that I can’t bring myself to kill the spiders in my bathroom is because when the world shut down in March, spiders (along with reruns of Friends and hefty servings of banana bread) became an important part of my life.

A few weeks earlier, Seb had injured his ankle and wasn’t able to walk, let alone snowboard. He was pretty bummed about it, and I’d often come home to find him on the same position on the couch, bored and unmotivated.

I was worried about him, and I’d walk home from work each day wondering how many spoonfuls of peanut butter I’d need to cheer him up.

One day, however, he met me at the door as I got home. Before I’d even untied my shoelaces, he’d pushed a jar in my face.

Introducing Hugo the First. We spent the evening watching Hugo spin a web in his new home: an old jam jar with bits of moss and sticks from outside, constructed lovingly by Seb.

When the world went into lockdown a couple of weeks later, Hugo was still enjoying his time in the jar. In fact, since there wasn’t much else to do, Hugo quickly became the centre of our attention. It wasn’t long before we found a second spider crawling along the kitchen floor – he became Hugo II. Then there was a third, a fourth, a fifth (Hugo III, Hugo IV, Hugo V, respectively). All their jars were “furnished” differently – household objects, playing cards, rocks… Did we have too much time on our hands? Maybe.

Then (as if it wasn’t already weird enough) it got weirder. Within a few days we ran out of jars, so we started putting them together, and this quickly led to the exciting realisation that spiders are savage little cannibals. The highlight of our day became a truly macabre occasion in which we’d introduce a couple of spiders to the same jar, gather around, and bet on which spider would eat the other first.

“How much food do spiders need?” someone asked one day. No one knew, which led to a series of questionable Google searches.

As my questions became more aggressively specific, Google struggled to find anything other than one answer. Flies. Well that’s just silly, I thought to myself. How am I going to get flies? I can’t just go out and try to… Hmm….

I’d like to say that I spent three hours running around the garden trying to catch flies only and I mean ONLY because a pandemic was happening and there wasn’t much else to do, but honestly catching flies is an ingenious and brilliant form of procrastination and I’d recommend it to anyone. Three hours and not a single fly. A perfectly useless afternoon.

Unfortunately, as with most things in life, we soon tired of our spider pets. Their webs seemed less interesting, their fights less gruesome, their lives less fascinating. As the weeks went on, we neglected Hugo and his dynasty.

You won’t be surprised to learn that the spiders soon perished. As we cleaned the assortment of crusty skeletons from our shelves, I thought what we’d done. How we’d let them perish, because they weren’t distracting enough to capture our attention anymore. How our need for constant mental stimulation had led us to a place where we would use and disregard lives without a second thought. Spider lives, I know, but still lives. How we’d become intoxicated with our own ability to play God. I remembered the original Hugo and wondered, if we hadn’t taken it too far, would he still be alive today? Why couldn’t we ever just enjoy things in moderation?

So now, even though I hate the spiders wandering freely in my bathroom, a mixture of hesitant fondness and extreme guilt prevents me from doing anything about them. I just feel the spider population in my house needs a break. The whole fiasco was the perfect lesson of how humans need to stop interfering and instead learn to love and appreciate things as they are.

On the other hand, maybe the lesson is that although spiders may provide some brief respite from the boredom caused by a global pandemic, they don’t actually make very engaging pets.

For Hugo, the first spider, who made Seb smile.

P.S. Before I say goodbye, beloved readers, a quick note – I won’t be posting blog updates on my social media much anymore, so if you wanna know when I next publish something chuck your email in below. Thanks heaps for the support! I would hug you all if I was allowed.

Processing…
Success! You're on the list.
Whoops! There was an error and we couldn't process your subscription. Please reload the page and try again.